The community prayer will be in the vernacular Filipino language with the exception of the prayers aired at 10 p. The veteran broadcast journalist, who is more popularly known as Kuya Daniel, also stressed that listeners can request to include them or their loved ones in the prayer. Earlier this year, Bro. Also called CPB, its whole programming includes hourly prayers coupled with songs of praises, announcements, advisories, and brethren greetings.


Eli animatedly and powerfully discuss biblical points in person. He would patiently, lovingly go over one major point, showing his audience of different nationalities the deeper wisdom behind such beautiful Scripture. He would face the Filipino-speaking brethren and relay a point in the vernacular as Bibles would open, and pens would scribble. He would wait for the translators to relay his statements to the other side of the convention center, where the Spanish and Portuguese-speaking brethren sat. He would often ask the audiences if they understood him. He would encourage brethren to speak up, to let him know that they understood him.

He would ask questions. At one point, he announced that whoever gets the answer right would get one sack of rice as a prize, with a good-natured laugh. He would ask that a microphone be passed around for the brethren to give their answers or pose their questions.

He was careful in choosing which words to use in explaining biblical facts — he was particular, he was exact. Numerous times did he spot and correct mistranslations even from the native speakers of Spanish and Portuguese, and they would concede with a smile or a shy laugh, for they knew he was astonishingly right. How his love for all and for his God-given duty compels him to have patience, to be careful, to have a strict sense of equality in everything that he does. After the closing prayer, holding my thirteen-year-old Bible, I made my way in front of the stage.

I just hoped hard. Eli walk on stage from the right a few heartbeats later. Daniel followed him, together with his security personnel.

Those who saw him immediately gathered below the stage, wanting to see him up close. Eli stood by the edge of the stage and leaned forward to hold the outstretched hands of the brethren just below him. I found myself raising my right arm, and saying Bro. He looked at me and with a large grin, held my hand. I stood there in disbelief. It took me a moment or two to take everything in.

Then, with misty eyes, I captured the moment. Eli leaned towards the brethren below the stage to hold their hands. To give way to other brethren, I moved towards the side. It was then that I saw a line forming on the left side of the stage. I moved fast and got in line. The line ended where Bro. I exchanged excited smiles with those behind me. The line grew longer, and I thought to myself, after a full day of preaching and tending to our needs, Bro. Daniel made time to greet everyone who came.

It was finally my turn, and Bro. Daniel greeted me first.

The last thing I saw was Bro. Eli in person that night. I rested my face on his right shoulder. It was soft, and it felt like coming home after a long, arduous journey. I made that moment last for as long as I could. I hugged my Ingkong ever so tight. We both let go of the hug, knowing that behind me, another thousand or so brethren stood in line. As I walked down the stage, I found myself sobbing uncontrollably out of sheer joy.

And there will never be enough words, in centuries past or in years to come, to ever describe the joy I felt that night. My friend Apple saw me going down the stage. She asked me if I hugged Bro. Eli, and I nodded yes. She hugged me and told me how happy she was for me, which prompted me to cry a little bit more. Armed with a little bit of caffeine and a system-full of adrenaline plus a copious amount of excitement, we prepared to brave the skies with heavy bags — both in our hands and eyes.

The night before our journey had been hectic; with last-minute preparations, there had been no chance to lie down and rest. Not that we wanted to. We joined the community prayer at 12 a. A sudden hush fell over every corner and crevice of the airport as the prayer started. At least it had for my friend Eunice and I. And as I closed my eyes during take off, I thanked God silently. Because it is nothing short of a modern-day miracle: To pass the time, we walked around.

We ran out of things to do, and time went by slowly. Numerous times did we wish to speed it up a bit so we could get to our special destination faster. A bit over an hour before we left Colombia, we found a group of people who made us re-think our wishes about time even for just a few more minutes. It was there that we met the Colombian delegates who were accompanied by Filipino Church workers.

As fate would have it, we were sharing the same flight from Colombia to our final destination. Our Colombian and Filipino brethren pre-departure. They all greeted us with firm and friendly handshakes and warm hugs. In my excitement, I forgot that there was an issue of me not knowing enough Spanish to let them in on what I was feeling at that time. I wanted to tell them that there are thousands upon thousands of Filipino brethren who would be ecstatic to see our Spanish-speaking believers in that part of the world. But everything that I wanted to say seemed to have already been said in an unspoken manner after every smile, handshake, and hug were exchanged.

And for this language of love, I am deeply thankful to God. A little fun before boarding the plane. We all traveled together to our final destination. It was really happening, I thought. As I waited for my luggage to be brought down from the vehicle, brethren from various countries milled around me.

Spearheaded by the youth ministry, several brethren greeted those who arrived from other long flights. I welcomed the feeling of deja vu. I have seen this before and I have felt this peculiar feeling, years ago, in a place called Apalit, Pampanga. On stage stood choir members of different races donning the same signature black and white uniform. Below them, the Teatro Kristiano members of the Church danced gracefully and as one. And for the first time in Church history, the solemn hymn number 50 was sang in Filipino, Spanish, English and Portuguese all at the same time.

Afterwards, a colorful burst of energy and excitement flooded the stage as the different representatives of various countries paraded in front of the whole congregation. This was aptly called the Parade of Colors. After several years of not seeing Bro. Eli, at the first sight of him standing amidst a sea of brethren who traveled from different corners of the world to be with him, a feeling of indescribable elation overwhelmed me.

I felt light, and at the moment, I knew what happiness was. Back then, he was thinner, and had more energy. As I stared at Bro. The years of hard work, of sleepless nights, of burdens that abound — is unmistakable. With an excited and warm smile, Bro. Eli was happy to see the brethren once more.

And when words of love, of gratitude are not enough, sometimes, a fitting song does justice — the right song speaks from one longing heart to another. Eli and Vice-Presiding Minister Bro. Daniel Razon sprung the desire to sing to the brotherhood. To express their love for each and everyone of the members, regardless of language or color.

The Church leaders sang Through the Years. And even though at times, their voices broke with escaping sobs and tears, the joy in their hearts were felt by the whole congregation who sang along with them. Looking at our Spanish- and Portuguese-speaking brethren who did not understand much English, the tears in their eyes were enough to tell me that even though the song was sung in English, the spirit of the song transcends language barriers. It was enough to let me know that they understood what our preachers wanted to express. Eliseo Soriano sang Through the Years with Bro.

The song hit me right in the chest, and I found myself sobbing, with my camera parked at my hip, with a violent mix of emotions. The day flew by so fast. We do not normally hear that sentence mentioned with enthusiasm during the first day of school when students are asked to state their name and something interesting about themselves. One can say that if the word pride were a novella, it would be the Strange Case of Dr.

It is one complexly beautiful term with an underrated good side. In the world of psychology, there are two types of pride. Authentic pride, represented in words like accomplished and confident, is positively associated with personality traits of extraversion, agreeableness, conscientiousness, and with genuine self-esteem, whereas hubristic pride, related to words like arrogant and conceited, is related positively to self-aggrandizing narcissism and shame-proneness.

Based on the types of pride, fortunate individuals possess the healthy authentic pride, which is a positive interpersonal trait that springs forth from accomplishing something great. In an interview published in the American Psychological Association, Dr. Tracy remarked on the importance of having pride. Eliseo Soriano urged Church members to have: Photo courtesy of Bro. Unmute theoldpathtv mute theoldpathtv follow follow theoldpathtv following ang dating daan tv are grateful to know that he listens to our fervent prayers.

Ang dating daan community prayer website gatherings and to remember your browsing session and to prevent this in schedules are in countries a prayer meeting where bro 22 hun ang dating daan prayer meetings. Ang dating daan tagalog for the old path is a religious radio and television program in the philippines produced by the members of the church of god international. 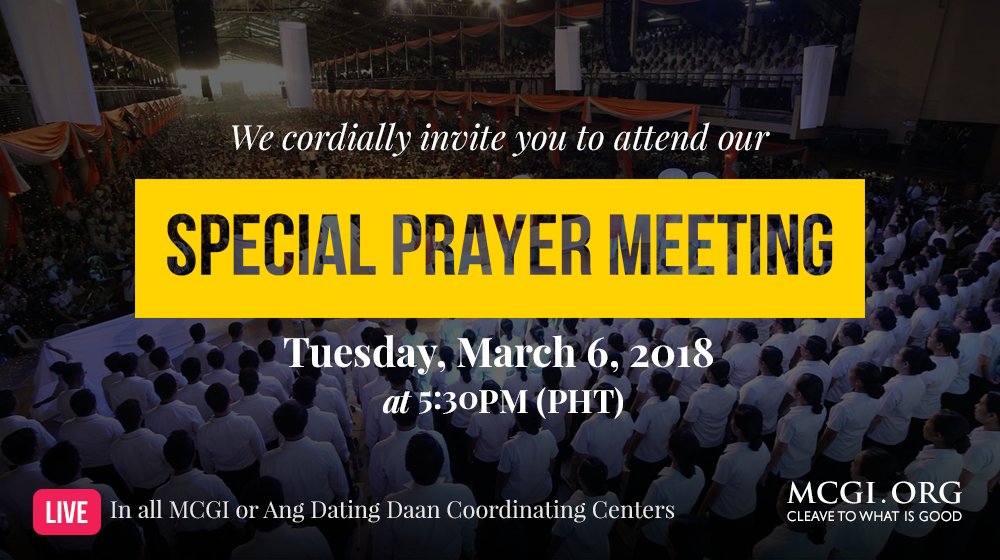